Canmore’s breathtaking mountain surroundings have attracted and inspired artists for decades. Painters, sculptors, potters, authors and musicians are part of our rich and diverse artistic community.

This 30-foot sculpture is located at the entrance of Elevation Place, Canmore’s recreation facility and community gathering space.
The New Brunswick sculptor included local artifacts donated by residents and created his piece from local stone, cast bronze and stainless steel. You may be able to identify some relics from Canmore’s mining histort Inside Elevation Place, you can see more local artists featured at the Canmore Art Guild Gallery. 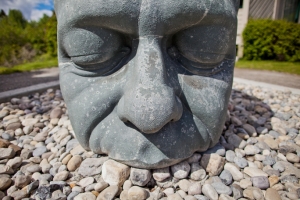 Lovingly referred to as “The Big Head” by locals, this seven and a half ton hyper-realistic blue-granite sculpture is an integral part of Canmore’s cultural fabric. The sculptor was inspired by the naming of our town after King Malcolm III, King of the Scots, who was nicknamed Ceannmore or “large head.”

Creative-minded locals decorate the statue on special events and holidays.
A must see photo opportunity for visitors, The Big Head is ranked #12 of things to do in Canmore on Trip Advisor.

Pigs Out of Rubble, designed by John Borrowman, artist unknown.

Little is known about this iconic Canmore mural. We wanted to find out more, so we followed a local rumor to Mayor John Borrowman. When we asked him if he knew anything about the mural he shrewdly tapped his head with his index finger, leaned in, and said: “It’s all in here.”

Borrowman first moved his pottery workshop into building 709 9th street (current home of Tavern 1883), and while renovating, built the wall that the mural is painted on today. He and his business partner were adding a second floor and they needed to construct a firewall. As the building was taking place, a huge Chinook wind tore through the valley and knocked it down. Fortunately no one got injured, but it gave John Borrowman the idea of imitating the broken part of the wall in the mural and paint the sky above blue as a reminder of the event. “What about the flying pigs?” we asked (because he had left out the most unique part).

So he recited part of the poem “The Walrus and the Carpenter” by Lewis Carroll,

“The time has come,” the Walrus said,
“To talk of many things:
Of shoes–and ships–and sealing-wax–
Of cabbages–and kings–
And why the sea is boiling hot–
And whether pigs have wings.”

John Borrowman’s pottery studio is called Of Cabbages and Kings and has a new location you can visit in Elk Run.

Enjoy these spots and more on Canmore’s Public Art Walking Tour.
Visit more art galleries and studios in Canmore including: