Experience Canadian Hockey in the Rocky Mountains. The Canmore Eagles are part of the Alberta Junior Hockey League and have games in Canmore and Banff from September to March each year. Come out to catch a game and see the fast-paced, high energy play without making a trip into the city! The Canmore Eagles are a non-profit, community-owned team that has players between the ages of 16-20 years old. Their players are competing on and off the ice with the goal of achieving NCAA scholarships to further their education and hockey careers onto professional levels. Get out and become an Eagles fan! Games include intermission entertainment, drink and food specials! Roam Public Transit is your link to the rink. Coming from Banff? Purchase your game day tickets at the Roam Transit Office that include round trip transportation at no extra cost. 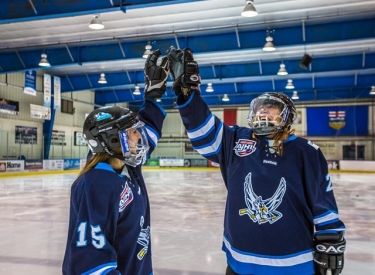