The Canmore Highland Games is an annual event taking place each year on Labour Day weekend since 1991. The Games events are held at Centennial Park, one block from Main Street. Some have said this is the most beautiful setting in the world for a Scottish festival. The panorama of the majestic mountain scenery of the Canadian Rockies cannot be topped; and it’s all only an hour’s drive west of Calgary! It seems especially fitting to have a Highland Games in Canmore, as one of the first Highland Games known was organized by King Malcolm III Canmore (1058-1093). Held at a fairly flat meadowland (the Brae O’Mar) along the River Dee, this sporting event was used for a royal contest to find the swiftest and strongest man in the kingdom with the necessary stamina to carry Malcolm’s messages across the land. Certain aspects of the games are so well known as to have become emblematic of Scotland, such as the bagpipes, the kilt, and the heavy sports, especially the caber toss. While centered on competitions in piping and drumming, dancing, and Scottish heavy athletics, the games usually feature live Celtic folk/rock bands, a Celtic market, sheep dog demonstrations, clan booths, beer garden, whisky tasting, Massed bands and more. Weather doesn’t matter – all events go on, rain or shine! You’re coming to the mountains so bring your layers. It’s often cool in the mornings, warming up later. Whatever the weather, the entertainment will be there for you, along with lots of great food and a heated festival tent. The atmosphere will be buzzing with anticipation of the competitions and events. 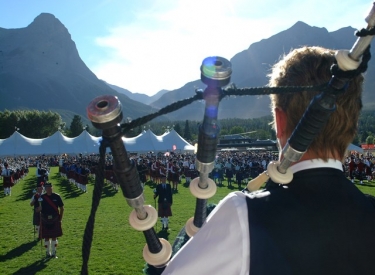