Canmore’s Canada Far and Wide project is as a must-visit, because music is a language that unifies the country of Canada and the world. The Canada Far and Wide Project is going to be a memorable event celebrating Canadian music from coast to coast. Even better, it’s entirely free.

The touring collective will be joined by artists performing at each of the festivals. The Canmore guests include Canadians Whitehorse, Birds of Chicago, Leeroy Stagger, Quantam Tangle, and William Prince. 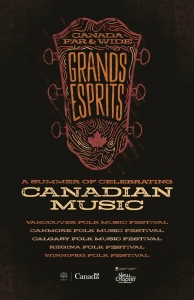